Posted on February 12, 2011 by Jackson Pemberton

JC Pemberton (1914 – 1996) [JC is his proper name, those are not initials] was the youngest son of Addison and Emma Frey Pemberton, of Creston, Union County, Iowa. JC attended Iowa State University where 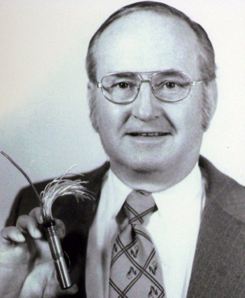 he received his Bachelor’s degree in Electrical Engineering. An interesting insight into the mind of JC as a very young boy on the farm in Iowa, can be found in the memoirs of his older brother Wendell:

JC always swore (and never had any other idea in his head) that never was he going to do hard [farm] work. He always said, “If I’m so dumb that I can’t make a machine to do this work, I’ll just sit down in the dirt and bawl.” He kept his promise. When JC came west into the orchards here in Washington, and saw his first cherry tree and the pickers picking cherries with 22′ ladders on my fruit ranch in Grandview, he sat right down with his back against a cherry tree and drew out a machine to pick cherries! If I had a blueprint of his first drawing, it would be almost identical to (the APE is one brand) those three-wheeled things with the buckling, folding boom, and a basket for a human, that you can put in or out or up or down, dodging any limb, and go anywhere to pick the fruit. That’s what this kid did, and that is how he was all his life.

His rise to fame began while working at the wind tunnel at Boeing, in Seattle, Washington, when he invented a mechanical pressure scanner that revolutionized the speed with which pressures on the surfaces of wind tunnel aircraft models could be measured and recorded. He eventually struck a deal with Boeing and began to manufacture and sell his “scanivalve”. Scanivalve, Corp. located in Spokane, Washington is owned and operated by his sons.

Because his invention dramatically reduced wind tunel costs, he soon became famous in aviation circles around the world. He was, for example, invited in the 1970’s to lecture before Russian Aeronautical Engineers and said he would if he could ride the day train from Moscow to St. Petersurg. After accepting their invitations (with the same conditions) for several years, the Russians finally allowed him his wish. They really wanted him over there.

JC loved to fly and actively held a private pilot’s license for many years. He sons grew up in the air and one of them, along with JC’s grandson, now own Pemberton & Sons Aviation in Spokane, Washington. JC’s first patent was for a spring loaded elevator on a toy airplane that could be launched vertically at high speed and the elevator would stay flat until the plane had slowed considerably whereupon the elevator would snap up and the plane would glide a long way because it could reach such a high altitude (for a toy).

In 1994 JC was inducted into the Iowa Aviation Hall of Fame.

When he passed away he had over 40 patents to his credit, including, of course, the scanivalve which has been instrumental in everything from flight and turbine tests to process controls and electronic pressure scanners.