Posted on December 3, 2010 by Jackson Pemberton

Notes for the bio of Stanley Addison and Ada Velva Pemberton 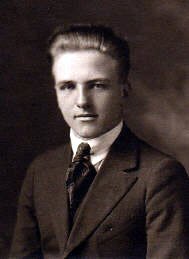 Dad teaches me to drive the tractor

I think I like this story because it demonstrates what a brilliant child I was!  Maybe?.  Dad dug a well on the farm in White Bluffs and lined it with concrete.  I was 5 or 6 years old, and I “helped” with that project.  I especially remember the steel bars that he set across one corner so as to make a ladder down into the well.  I can’t imagine what I might have done more than get in the way and provide a little entertainment.  Anyway, he decided that I could try to drive the tractor.  I suppose I begged to drive, who knows.  He showed me the clutch and emphasized that that is what I needed to push when it was time to stop.  My first trip was to just drive a big circle so that the tractor and trailer it was pulling would be facing the well instead of away from it.  He carefully explained that I would have to make a large circle and drive way out and around and come back because if I turned too sharply, the big steel brace that ran from the tip of the tongue to the front corner of the trailer would get caught on the big cleats of the rear tractor tire.  I let the clutch out slowly and pushed on the throttle lever and headed straight away from the well.  I was a bit frightened to turn at all but after while realized I would have to turn so I did.  Well, I turned too sharply then, and sure enough the big cleats on the rear tire, one after another, caught under that steel brace and I thought the trailer was going to flip over.  I didn’t have the presence of mind to push in the clutch or to straighten out the front wheels.  I just sat there on the seat staring at Dad who was waving his arms and yelling at me to push in the clutch, which I finally did, but not before scaring myself pretty soundly.  It isn’t fair to speculate, but if I know men, he was thinking how he would explain all this to mother if anything serious had happened.  Oh yes, the brilliant thing?  Well, if Dad hadn’t thought I was so brilliant, he never would have thought I could be taught to drive at such a young age. Or?

A story George Dowd likes to tell about Stanley 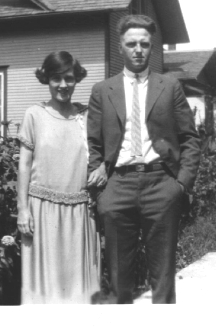 George and Brenda lived with Stanley and Velva for some time while they were in High School. One day while working in the new orchard South West of the Canal on the Tieton Ranch, George said he didn’t want to work anymore and quit.  Stanley spoke with him and determined that he was serious about not working whereupon he said, “As long as you put your feet under my table, you will work in my orchard.” George got a new perspective on things and immediately went back to work.  He was much impressed with Stanley’s forthright and clear statement of his expectations.

He offers to provide his son’s tobacco needs

His youngest son Jackson tells this story: While walking home from school I found a partial pack of cigarettes lying beside the road. That began my short smoking career. I thought it was cool to actually own some of this contraband and bragged to my friends that I had some to share with them – which I did over the next few days. I tried many times to inhale the smoke like some of my tougher buddies could do, but I had severe difficulty with my attitude. I just couldn’t see why I would want to do something that threw my whole torso into convulsions as it reacted appropriately to the smoke. So I was content to be “with it” by puffing on the things. When the cigarettes were gone, I found an older friend who got me a few cigars from the local bar. I smoked a couple of those, the last one on the last day of my eighth grade year.

The principal spotted me smoking on the school grounds even though I was a long way from his office. He called Dad and reported my infraction but said nothing to me. When I arrived home I found Mom gone and Dad in the basement discussing our furnace with a neighbor. I had stood there a moment when Dad turned to me and said, “I hear you have taken up smoking.” Completely off guard, I could only answer “Yeah”. “Well, you know,” he said, “it’s illegal for you to buy tobacco so you let me know what you need and I’ll get it for you.”

Funny thing was I never had another desire to smoke. He had put his finger exactly on my disease and cured me with that one sentence.

Stanley trees the Jeep at the Naches ranch

During my high school years we had two apple ranches: one in Tieton and one several miles up the Naches River west of Naches. On one occassion when dad was working alone at the upper ranch, he got a tractor and trailer stuck in the mud in an apple orchard. The 1948 Willey’s Jeep was there so he got a chain and hooked it up in front of the tractor. The Jeep had four wheel drive with a low range gear but the engine needed a tune up so he had to set the throttle rather high so the engine would keep running to keep the wheels turning while he left the Jeep and mounted the tractor and got it adding its torque to the stuck in the mud problem. It all went fine, the rigs moved ahead and the trailer and tractor came out of the mud. However, in the process, he gave the tractor a little too much gas, and it out ran the Jeep just enough to slacken the chain between them and the chain came unhooked at one end allowing the Jeep to run free through the orchard. Now these old apple trees always had several large limbs radiating outward and upward from a 3 foot stump. If the Jeep collided with any of them, one of those limbs would have came right across the windshield (which was lying flat on top of the engine hood) and crushed it down onto the hood and thence down onto the radiator and caved the top of it also. However, there was one tree in the orchard that came out of the ground at a steep angle and had no limbs on the upper side of this heavily leaning trunk. The Jeep singled out this target and ran right up the tree until all four wheels were spinning in the air. The only damage to the Jeep was a slightly band front bumper from the initial impact.

I have one of the best Dads in the World

When I was in Junior High School dad and I went to visit a neighbor on some kind of business. I stood around on one foot and then the other in total boredom while they talked about something way over my head. All at once Arile Griffith turned to me and said, “You are a very fortunate boy! Your father is one of the finest men I have ever met. He is honest and fair when he doesn’t have to be and even when it is not to his advantage.” I have stood a little taller ever since that moment. 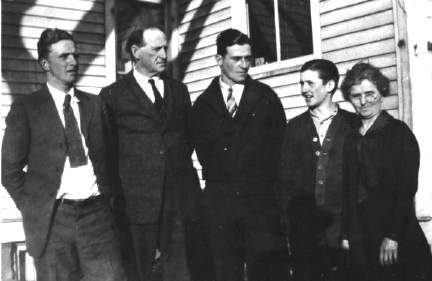