Posted on January 17, 2011 by Jackson Pemberton

Overview of the George Pemberton of Cheshire to Virginia Colony Branch

This branch starts with George Pemberton I [Note: the “I” is an arbitrary addition for the sake of clarity in this and related articles on this branch.] who was born about 1660 in Cheshire, England and his wife Sarah Middleton, probably from Nantwich, Cheshire. His son George Pemberton II emigrated to the Virginia Colony in 1710. There he married Elizabeth Brooks and they had children Isaiah (b. 1bt 1718), George [III], Ann, Judith, and Sarah. He also married a Margaret but we have no record of issue from that union. Isaiah married Dr William Hall’s daughter Elizabeth Hall and they had 12 children: George IV [There are two of these because both Isaiah and George named a son George.], William, Isaiah, Elizabeth, Richard, Hannah, Ann, Judith, Thomas, John, Sarah, and Ruth.

George Pemberton III married Judea Brooks and they had 9 children: Mary, George IV, Jesse B., David, Thomas, Margaret, Judith, Elizabeth, and Phebe. This is a prolific branch with many many descendents. More information can be found in the Pemberton Biographies section of this website.

Wonderful News in This Branch!

DNA test results for a George Pemberton of Cheshire arrived April 21, 2011, with very exciting consequences! This George is clearly in the same Pemberton branch as a George Pemberton of Cheshire born about 1685! To see for yourself why this is so, you can click here: http://www.familytreedna.com/public/pemberton/ and look for the menu named “Y-DNA RESULTS” near the top of the page and pull down to “Colorized”. The Pemberton DNA Project test results will be displayed in chart form. Look for the chart row named “Mode”. This is a computer generated deduction from the test results immediately below it. The computer looks at the values in the group for each marker and deduces that the most frequent value is the ancient value. Thus the Mode line is what the DNA of the ancient common ancestor would have to be. The mutations from that ancient DNA are highlighted (very dimly) in the present day DNA results. You can see one mutation for each of the four people in the group.

The upshots of this exciting development are manifold:

This is a wonderful demonstration of the power of genealogical DNA.

As of this writing, April 2011, the descendants of Joseph Pemberton, born about 1770 in Tarvin, Cheshire, England and the descendants of George Pemberton, born about 1685 in Cheshire have begun to collaborate on their respective “twigs” to discover where they marge into this firmly established branch. That collaborative effort has a “Group” on this website where a discussion forum contains a journal of the on-going work. The remainder of this article discusses the origins of the older twig.

In 2003, an old scrapbook was transferred to a descendant and the valuable genealogical information within its pages began to come to the knowledge of interested researchers. In an email of January, 2010, Dixie Ann Pemberton described it to the author of the present article with these words:

Author’s Note: The designations George I, George II, etc are not from original records but a short way of conveying which of the many George’s is indicated. George I refers to the one who married Sarah Middleton, and as far as we know, never left England. His son George II was the emigrant to Virginia Colony.

George M. Pemberton, Sr., (1810-1878) began to write in a ledger, in the late 1820’s , about the time of his grandfather’s death, (George III 1718-1827), and while he was still living in Caldwell Co.,KY. He took his ledger with him when he moved his family to Sedalia, MO, following his uncle and his family, George IV.  George M. writes of his relatives, and says these pages were told to him by his father, Jesse B. Pemberton, a brother to George IV. When dying of typhoid in 1878,to his son George M., Jr., he left the Scrapbook, now his personal ledger bound with the early Walnut Baptist Church minutes, beginning in 1834.

George M., Jr., left the Scrapbook to my grandmother, Constance Taylor Pemberton, married to my grandfather and George M., Sr., youngest son, Thomas Mason Pemberton (1870 -1863). Only as adults were we allowed to turn or read the fragile pages, especially when my grandparents passed the Scrapbook to my Aunt, Cecilia Pemberton Marks (1912-2001). She in her will left the historically material collected by my grandparents, to my brother, Gordon Lee Pemberton. Because of my interest in genealogy, he has let me borrow all these boxes of material. The most important to the Pembertons is the SCRAPBOOK.

The information contained in it soon became the focus of intense interest of several researchers: George Daniel Pemberton Buckley and Dixie Ann Pemberton were among the foremost. They spend two years meticulously examining each genealogical statement in the old book and checking it against all the available records they could find. The result was a thorough confirmation of the old genealogical record, which among other things, extended the family line back into Cheshire. Daniel Pemberton stated afterward that the old scrapbook had proved to be 95% correct.

The Fascinating and Enigmatic Poem. (Written by King Charles II?)

The earliest record of the old scrapbook begins thus:

My great great granfather, George Pemberton, lived in Cheshire County (or parish) England. His residence was known by the name of “Pemberton Huff,” and received its name from some circumstance that took place between the king and himself, and the king ordered the following notice to be put up at Pemberton’s gate post:

While olivies are green and commodities rough,
Here is the place for Pemberton’s huff.

He married Sarah Middleton. His son, George Pemberton came from England to America and settled in Virginia in 1710, and married Elizabeth Brooks.

The scrapbook continues with the listing of the children of George and Judea and many more notes and descendants. I will insert an picture of the first page of the book here and then continue this discussion below it. This picture is presented with permission of its owner, Gordon Lee Pemberton. 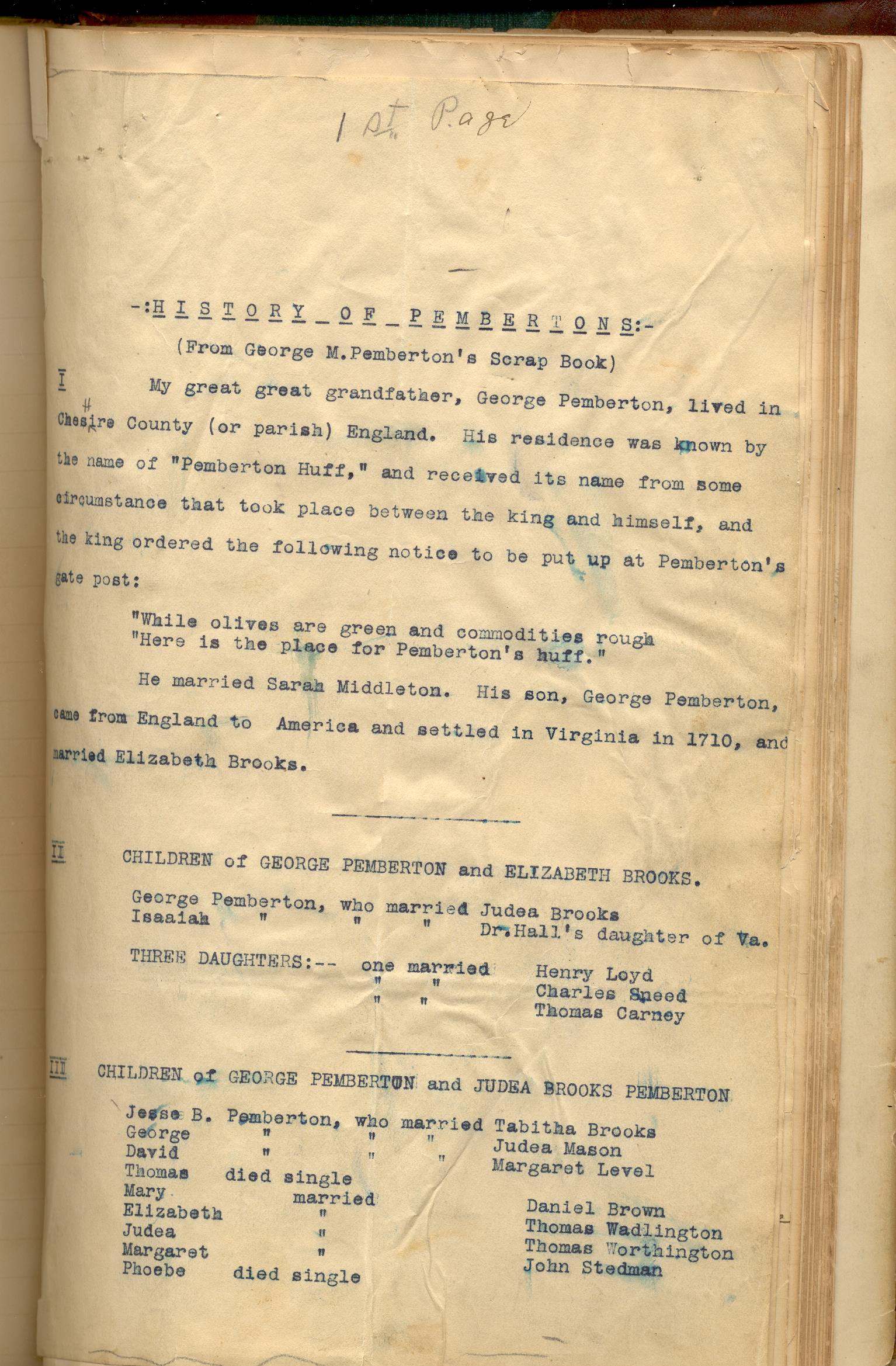 Obviously, part of the original record is lost, for the one pictured here is from a typewriter and therefore must be a transcription of earlier notes

At the time of this writing, several George Pembertons have been found in Cheshire well within the timeframe required by this record. There is also a christening record for a Sarah Middleton. No marriage record has yet been found for George and Sarah. Thus this old poem becomes a tantalizing riddle that begs to be identified. The poem was posted on several forums during 2010 and many theories were advanced. The one that seems most promising came from a email from a posting on the Cheshire Rootsweb forum. Judy Olson said this:

… Then I realised that of course the word order was down to the poetry and reversed the words. “Rough commodities”. This “may” be the clue to the whole thing. “Rough commodities” was/is a shipping term. If you google “rough commodities charles II” the top hit is a summary of the Navigation Acts passed by Charles II and then up to 1696 (so William & Mary). I don’t have the time or brains at the moment to go through it in detail but go to the bottom of page 3 and you’ll find reference to New England merchants shipping in rough commodities. My initial reading is that they were bringing rough commodities from America and discharging them at British ports but then re-exporting them, and somewhere along the line bringing in imports of greater value from Spain. These merchants asked for – and got – some sort of concession from the king as to the bonds they were supposed to lodge against their cargoes. So my theory is that whether or not a Pemberton was one of the merchants who actually applied to the King for the concession, the family was involved somehow in the shipping trade. The change in the navigation acts allowed them to prosper by bringing rough commodities across the atlantic (possibly salt cod) and importing luxury Spanish goods (eg olives) to Britain. …

If some record could be found of the “circumstance that took place between the king and himself” then we might find where George lived. It should also be noted here that the word “huff” is probably used in order to make a pun. George’s gate post probably stood in front of a house and yard located on a “hough” (For you Americans: this is pronounced exactly the same “huff”; and “hough” is old English for a farm field.) The fact that King Charles II was a fun loving fellow, who delighted in playing with words, adds further to the theory that this record, like the rest of the old scrapbook, is also accurate. If George was for some reason in a huff, the very literate king could easily have created this pun, which so pleased him that he had to have it posted on Pemberton’s gatepost.